Film / Off the Black 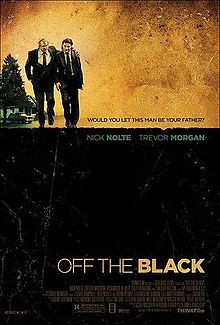 Would you let this man be your father?
Advertisement:

A 2006 dramatic film, Off the Black features Nick Nolte as Ray Cook, an irascible umpire unhappy with life. At the game to decide state play-offs, Ray calls a fourth ball on the pitcher, Dave Tibbel (Trevor Morgan), clinching a loss. In revenge, Dave and his friends vandalize Ray's house. Ray catches Dave, and forces him to clean up, as well as making a proposition that Dave come along to Ray's 40th high school reunion as a means to show off how good Ray wishes his life was. In the process, Dave and Ray strike up an odd friendship.