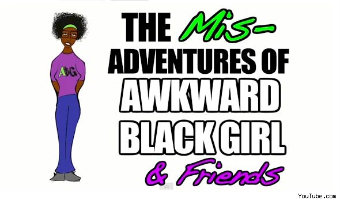 Well, this is awkward.
"My name is J, and I'm awkward — and black. Someone once told me those were the two worst things anyone could be. That someone was right."
— J
Advertisement:

The Misadventures of Awkward Black Girl follows the titular character, "J," a diet-pill salesperson who doesn't hate her job but thinks her co-workers are "pretty much the worst people in life." As a coping mechanism, she writes rap lyrics that she considers "too Nicki Minaj" and obsesses over the awkward issues in her life. The show addresses concerns such as "What do you do when you constantly run into the same person at stop signs?", "How do you cover up waving to the wrong person?", and much more.

The brainchild of writer/director Issa Rae, who was unable to identify with sexy vixens and sassy black women on TV, the show revolves around awkwardness, "which is a unifying and universal thing that we all have experienced in some capacity."

The show sprung into popularity after only a couple of months, due to the relatable Black and Nerdy main character not often shown in television. It began accepting donations via Kickstarter

to extend its first season, which culminated in the raising of $56,000, nearly doubly their goal of $30,000. In December 2013, it was announced the show had been picked up for television by HBO; the project eventually became a new series titled Insecure.

Check out the official site of the series at AwkwardBlackGirl.com

The Misadventures of Awkward Black Girl contains examples of: