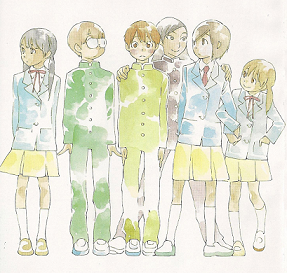 From left to right: Saori Chiba, Makoto Ariga, Shuuichi Nitori, Chizuru Sarashina, Yoshino Takatsuki, and Kanako Sasa.
"My sister's dream is to go to a school for idols and to be classmates with Maiko-chan. I think that's stupid. My dream is..."
Advertisement:

Wandering Son (Hourou Musuko in Japanese) is a Slice of Life manga created by Takako Shimura, which was serialized in Comic Beam from 2002 to 2013. It follows two ten-year-old children whose genders are different from the biological sex they were born into. The first is Shuuichi Nitori, a shy and sensitive girl with a love of baking who wishes she could become the kind of girl that truly reflects her heart. The second is Yoshino Takatsuki, who is admired by his classmates but bullied by other boys for things about himself that he cannot control, and who wishes to become a proper man.

When Shuuichi transfers to a new school, she is sat next to Takatsuki and the two children become fast friends. Eventually, they are able to figure out their nature, and do their best to realise their personhood despite the adversity and shame imposed upon them by the surrounding society in which they live: for example, they begin to dress as their correct genders using clothes acquired or gifted from other people.

The story follows the lives of Shuuichi, Takatsuki, and those closest to them as they struggle with matters of identity, adolescence, and how they relate to the roles of the society in which they live. The plot is made up of the milestones that come with adolescence, including the day-to-day occurrences and everything in-between, while the dreams and secrets of the young cast create its drama. The dialogue primarily refers to Shuuichi with "he/his" pronouns and Takatsuki with "she/her" pronouns because most of the other characters in the story are unaware of the correct genders of the protagonists, and the main characters cannot use the correct pronouns for fear of social ostracization. However, as readers, we are aware of which gender the characters are, and refer to them within this article with the correct pronouns.

An 11-Episode Anime for the series aired in winter 2011. The manga has been licensed by Fantagraphics Books and has been released in hardcover since June 2011. Crunchyroll obtained the license to stream the series overseas, but the license expired in 2021.

No relation to the early '70s shoujo manga and anime Sasurai no Taiyō, whose title translates to Wandering Sun in English (perhaps to avoid confusion, the official English title of that series is Nozomi in the Sun).