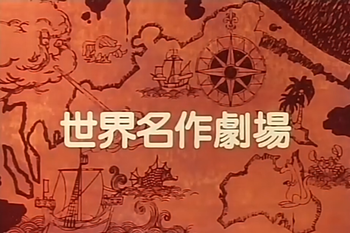 Not to be confused with Masterpiece Theatre, the long-running primetime program on PBS that showcases British productions.

World Masterpiece Theater (Sekai Meisaku Gekijou, 世界名作劇場) is a long-running series of anime adaptations of classic western literature broadcast on Fuji Television and largely produced by Nippon Animation, who were formerly known as Zuiyo Enterprise until 1975. During the franchise's peak, each year the company took a classic novel (mainly from the West) and adapted it into a series of about 50 episodes. The different masterpiece series are, with the exceptions of the occasional sequels or prequel, not connected with each other.

While the series in general is aimed at children and many of the originals that got adapted were children's books, its themes and plots can be surprisingly mature. Especially in the early years, when anime was little known in North America, the series stood in stark contrast to the traditional western animation. This may be part of the reason why relatively few entries in the series made it to the airwaves in the United States (despite many of the books being by American authors), and "Anne of Green Gables," despite being from a Canadian author, has never been on Canadian TV in English. Some of the series (including Anne and Princess Sarah) do have English dubs that aired in Asia, South Africa or other territories and never in North America, but quite a few (such as Little Women and Swiss Family Robinson) have aired on North American television. Nevertheless, many of the installments in the series are well-known and loved in Europe and Latin America as well as in Japan.

A similar series is Grimm's Fairy Tale Classics, also produced by Nippon Animation (and just one of many other anime adaptations of Western children's literature produced by that studio). Compare also to Animated Classics of Japanese Literature, also by Nippon Animation, which presented heavily condensed versions (generally one half-hour episode per story) of classic Japanese novels. Both of those shows aired on rival networks (TV Asahi and Nippon Television, respectively).

The entries into the series are:

Entries into this series provide examples of: