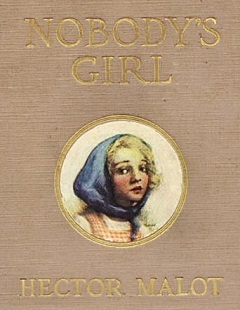 Nobody's Girl (French: En Famille, lit. Amongst Family, 1893) is a novel by Hector Malot. The story was later translated into English as The Story of Perrine by Gil.

The story itself is about Perrine Paindavoine, a 13-year-old French-Indian girl who arrives to Paris with her gravely-ill mother, Marie. They head to a village in the French North-East named Maraucourt

note (link is in French), the place where Perrine's Disappeared Dad Edmond is from, to meet with her grandfather Vulfran. Marie dies of her illness despite her and Perrine selling pretty much everything in their possession to get the meds she needs, and before kicking it she warns Perrine that her grandfather won't want to take her in since he greatly objected to her and Edmond's marriage. Perrine still decides to go there so she can meet her grandfather no matter what and build her own life...

There is a Japanese anime series, Perrine Monogatari aka The Story of Perrine, based on the novel. It is part of the World Masterpiece Theater collection, which years later adapted Nobody's Boy, another of Malot's novels, into an anime called Remi, Nobody's Girl.