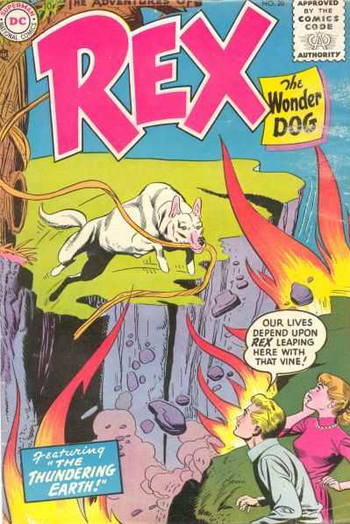 A Heroic Pet Story is a show or story that stars a non-anthropomorphic animal that regularly engages in heroic acts. Such animals are almost always pets or companion animals, however a few examples are about animals have no permanent owner but still choose to help people. Such animals are always physically normal, and in live-action shows are potrayed by real animals. They also do not talk or otherwise display sapience, nor do they have supernatural powers.

They do, however, tend to be shown as being somewhat smarter and more aware that most real life animals, and generally demonstrate a remarkable ability to follow specific instructions, usually along the lines of "Go get help, Tropey" or "Take the rope to Trope-tan, Tropey!" They will also often take the initiative to do whatever needs to be done to rescue a person. This phenomenon is known as Timmy in a Well.

Most Heroic Pet Stories center on a family that owns the pet. In these shows, the daily lives of the human characters will play an important role. However, it is the animal that will always get the title billing, and the animal will perform some act of heroism at least once an episode. Such stories will often feature A Boy and His X, in that there will be a child who has the most interaction with the animal. The child is often the character who ends up needing to be saved.

Other works depart from the family centered model. They may, for example, mix Cop Show with Heroic Pet Story by having the lead animal be a police dog.

Often the pet is an outright Action Pet.