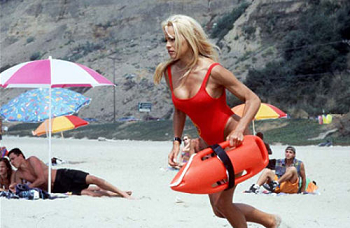 We're sure most people watch it for the story...right?
"See this is the brilliance of the show. I say always keep them running. All the time running. Run Yasmine! Run like the wind!"
— Chandler about Baywatch, Friends
Advertisement:

In 1975, über-producer Aaron Spelling came up with an outrageous idea — a TV show about three female detectives who run around without bras. Back then, women rarely had leading roles in hour-long series, and even though many women did run around without bras, they certainly did not do so on TV. Charlie's Angels changed all that, introducing a spellbound nation to the Jiggle Show, a genre that featured shows with a whole lot of women running in slow-motion. Or at least running without bras. Some of them even had plots and stuff.note Somewhat ironically, the canonical example, Charlie's Angels, did have quite a lot of plot and could have stood alone even without the fanservice. Sorta.

The "jiggle concept" didn't have to involve slow motion or even actual jiggling, but just lots and lots of scoop necks and bending way over. Top executive Fred Silverman (hired away from CBS for this purpose) came up with dozens of jiggle sitcoms, notably Three's Company and The Love Boat. The genre reached its zenith between 1978 and 1981, when producers tried to insert gratuitous skin into increasingly inappropriate shows, most notably the first season of The Facts of Life, a show set in a children's boarding school.

While in the 1980s, audiences soured on the concept and bras came back into fashion, the use of sexy women to sell a show never truly went out of style, as demonstrated by Married... with Children. In the 1990s, Baywatch, which combined women and Slow Motion, launched a wave of syndicated "jiggle" action shows, while the Fox network became known for its raunchiness during the 2000s.

While in the 2010s, such egregious showcases were now held in bad taste, cable shows such as Game of Thrones and Lost Girl owe their popularity in no small part to its use of seductive imagery. Of course, by observation, the focus on jiggling has shifted to the buttocks through the popularization of "twerking".