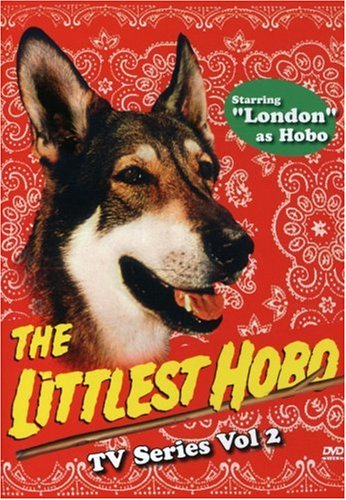 The Littlest Hobo (1963-65, 1979-1985) is a Canadian television series that chronicled the journeys of an unnamed heroic German Shepherd who travelled from town to town, helping people in need. It is based on an American film of the same name released in 1958.

In every episode, the dog (simply referred to by most fans as "the Hobo") befriends a person or family who is in need of help (due to various circumstances). The Hobo often performs dangerous feats to save the supporting characters from danger, and helps them solve their current problem. When his job is done at the end of every episode, the Hobo declines to be the pet of the people he has helped, and departs to continue his cross-country drifting.

There have been two separate series made that bear the name The Littlest Hobo: the original (which ran in the 60's) and the more widely-known sequel series that aired on CTV in the 80's. The various dogs featured in both series were all credited as "London".

The Littlest Hobo is considered to be a cultural landmark for Canadian television, and is still remembered fondly by many Canadians who watched the sequel series when it originally aired. To this day, it runs in syndication on Canadian television.