Series / Little Mosque on the Prairie 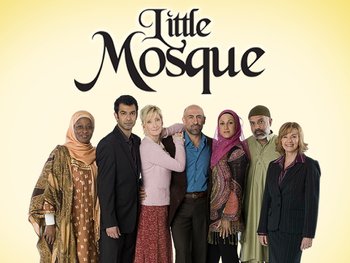 "Nothing separates men and women like Hockey Night in Canada."
—Baber Siddiqui
Advertisement:

This comedy series is about a small community of Muslims living in a small town in western Canada. The series opens with Amaar Rashid leaving his job as a lawyer in Toronto to become the imam for the Muslim community in the small town of Mercy, Saskatchewan.

The comedy comes as much from the interactions among the various members of the Muslim community, Shi'a and Sunni, Arab and African, as from their interaction with the predominantly white and Christian townspeople of Mercy and between Amaar's big-city ideas and the locals' small-town values.

Based on series creator Zarqa Nawaz's experiences living in a small town in western Canada.