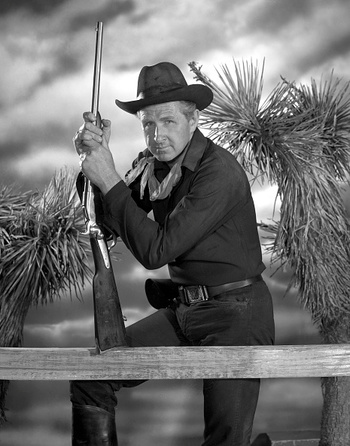 "In the aftermath of the bloodletting called the Civil War, thousands of rootless, restless, searching men traveled west. Such a man was William Colton. Like the others, he carried a blanket roll, a proficient gun, and a dedication to a new chapter in American history...the opening of the West."
—Opening Narration
Advertisement:

The Loner is a Western Series created by Rod Serling and starring Lloyd Bridges as William Colton. It aired for one season (1965–66) on CBS.

Colton, a former Union Cavalry captain, spends the years following the Civil War wandering from town to town in the American West, meeting old friends and strangers alike and helping them to solve their problems while trying to find himself.

The show followed the basic format of other Western shows such as Have Gun – Will Travel and Maverick, but added Serling's trademark philosophical qualities in an attempt to make a Western series for more mature viewers. CBS wasn't happy with the focus on ideas over action, however, and when ratings failed to meet expectations the show ended up being canceled at the end of its lone season.