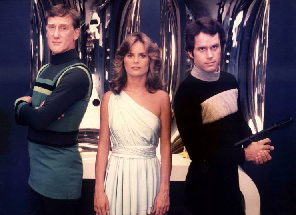 The one on the left is an android. Really.
Advertisement:

After the success of the movie Logan's Run in 1976, some bright studio executives decided it would make a wonderful idea for a TV series — provided the sets, costumes, special effects, and shooting locations weren't too expensive.

Logan's Run (1977–78) was the result. Only 14 episodes were filmed, and only 12 of those were broadcast on CBS before the series was cancelled. The series included a number of differences from the movie; Logan and Jessica were now played by American actors for one note (Heather Menzies, was actually Canadian), while a new character, an emotional android named Rem (Donald Moffat), was added.