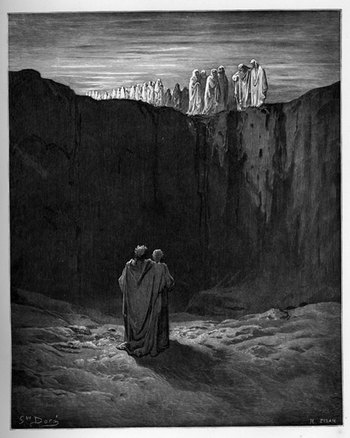 Neither up nor down.
"It's like going from nowhere to nowhere."
— Bob Dylan
Advertisement:

Heaven and Hell are simple concepts. When people die, good ones go to Heaven, while the bad ones go to Hell. But what about the others, those who aren't good enough to meet the strict prerequisites of Heaven, nor evil enough to deserve Hell?

Enter this trope.note But don't abandon all hope, ye who enter. That's the other place.

This trope is about places, usually called Purgatory or Limbo, which serve as an intermediate afterlife between Heaven and Hell, where morally average people go after they die. The concept not being unique to any one religion or universal to most of them, however, can mean the names get co-opted for any number of other purposes.note The two actually aren't the same in Catholic theology — Purgatory refers to a place where one's sins are purged before ascending to heaven; Limbo (from the Latin limbus, meaning "edge") is a region on the outskirts of Hell where the souls of the unbaptized wander forever. In fiction, however, the names are often treated as more or less interchangeable.

Often the first place that people come when they die, this may be simply an Afterlife Antechamber: a waiting room of the dead, where the souls of the departed may be assigned to their final destination by some manner of Celestial Bureaucracy. Alternatively, in the event of a Near-Death Experience, this may serve as a brief respite where the hero can confer briefly with a dead loved one or mentor before coming Back from the Dead to fulfill their ultimate destiny.

What these (meta)physical places are actually like varies greatly. Sometimes it's shown as another world, much like our own. Bleaker works may depict it as a dull greyish void where nothing happens, or a misty ruin, shadowy forest, endless cave or desert, or a dark version of the real world. Sometimes it's a literal waiting room, or a bright garden or chamber of white stone with light pouring in from Heaven proper. The Limbo of The Divine Comedy is a serene and beautiful but endlessly dreary castle on the outskirts of Hell. It won't be a place of endless fiery torment, but it won't be paradise, or even as relatively pleasant as being alive.

For some this may be a short stay, while for others it can last anywhere from a few centuries to all eternity. Sometimes the duration is a sentence based on the exact amount of bad karma a given soul has to work off. Alternatively, it may be an Epiphanic Prison which will last as long as it takes for the soul within to realize enlightenment, let go of their past, or truly repent their past deeds — possibly never. It's not The Nothing After Death or outright Cessation of Existence, but some of those trapped in Limbo might start to wish it was.

Another possibility is that this is the setting for The Journey Through Death; an intermediary place that the dead have to cross in order to get to what awaits beyond.

In a setting that doesn't have any kind of Purgatory or Limbo, a character might instead be Barred from the Afterlife altogether and left to wander the earth for all eternity.

Compare Void Between the Worlds, the emptiness between Alternate Universes or higher planes of existence, which is often depicted similarly, particularly when the various afterlives are portrayed as universes unto themselves.

Also compare Prison Dimension, where a living character may be physically banished to a Limbo-like place as The Punishment, often in the Phantom Zone.

Not to be confused with Everyone Is Jesus in Purgatory, an Audience Reaction about literary interpretation, although when the Rule of Symbolism is in play, Angels Unaware and Devils In Disguise may indeed be present in Purgatory, and God could very well be your copilot through Limbo.

As with all Death Tropes, beware of spoilers.