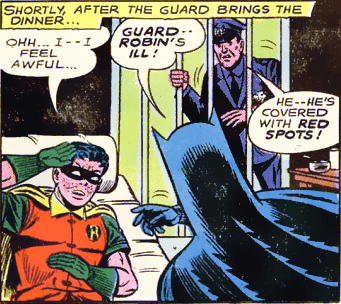 Good thing Batman had his Bat-crayons on hand.
Advertisement:

Everyone knows that The Guards Must Be Crazy, and one of the best examples of that is their reaction to faked illness. Convince your captors that you are unwell, and they'll throw all their common sense out the window, allowing you to take them out when they enter the cell to check on you. This works better if there's someone else in the cell who can do the talking ("Guys, I don't think he's breathing. You're not going to leave me in here with a dying man, are you?") and best of all if you can claim that the Big Bad would be unhappy with the guard if the prisoners died on his watch. Of course, if the guards have no reason to want you alive, this will probably fail. Accordingly, you'd better hope that yours are either semi-principled or that their boss gave them orders to keep you alive.