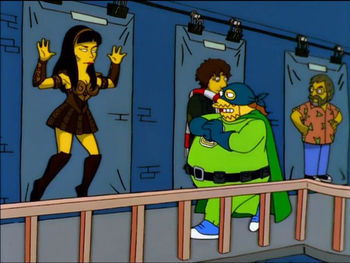 "The collector comes
The collector buys
And the kids who wait get a rude surprise
It isn't for the joy of the toys, expect
The collector to be there…
Just to collect!"
— Al McWhiggin, "The Collector"

One of the characters runs afoul of the Collector of the Strange, who decides to add them to his collection. Usually this is seen in Speculative Fiction: the collector is an alien, often of the sufficiently advanced variety, and the collection is only revealed at the end in a Twist Ending. But he could just as easily be a slaver or an obsessed lunatic in a present or past setting. He's prone to saying "It Must Be Mine!" and "If I Can't Have You…, no one can!"

Where the horror of being added to a collection is not the point of a Twist Ending, then the remaining cast members mobilize to rescue the kidnapped individual — and usually free all the other "specimens" in the collection in the process.

A variation sometimes seen in children's shows has the collector stealing the character's unusual/unique pet. Vulnerable to Interrogation by Vandalism. If they have somewhat altruistic motives, their "collection" will be a comfortable Fantastic Nature Reserve. Of course, it may just be a Gilded Cage... Compare Living Doll Collector.

If you are looking for the movie of the same name (which includes such a villain), see here.