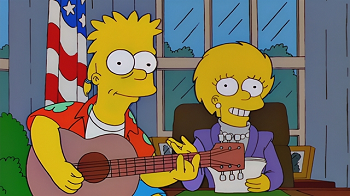 Some families have one member who is especially successful, or at least famous and influential… much moreso than the rest of the clan. Sometimes another member of the family decides that this means they should have an in with their well-known, wealthy, or influential relative, and they expect to reap some of the benefits of Nepotism for themselves. Alternatively, such family members try to take advantage of sharing the family name to get a foot in the door elsewhere by exaggerating their closeness to said successful relative or by falsely claiming to share talents or knowledge with them. In other words, they try to get by on the coattails of their more accomplished kin.

This trope covers instances in which a relative tries to capitalize on the success or fame of an unwilling or unwitting relative. It does not cover instances where the successful relative agrees to help out: that's covered under the Nepotism trope. Often, the less-successful relative is not generally incompetent but needs a way into an area of enterprise or opportunity that isn't his or her own. As you might expect, Coattail-Riding Relatives tend to be found out, either by the famous relative or because they end up in over their heads.

This trope is usually Played for Laughs, but it's also occasionally used more seriously in dramas as a source of familial resentments when the successful relative shuts down the coattail rider. There's extra irony if the coat-tailing relative had previously disowned or driven off their successful relative and now wants to claim that blood is Thicker Than Water.

Inversely, the pervasiveness of this trope has led many genuinely talented people to have to fight the accusations of coattail-riding. This is especially a problem in the acting industry and has led a lot of actors and actresses to change their family names in order to hide from the stigma, e.g. Nicolas Cage (born Nicolas Coppola); an interesting case is Emilio Estevez, who uses his real name professionally so people do not associate him with his more famous father Martin Sheen (born Ramón Estévez) and brother Charlie (aka Carlos Estevez).

This trope sometimes overlaps with Gold Digger, Stage Mom, and Obnoxious In-Laws. The relative looking to ride the coattails may also be Vicariously Ambitious for the famous relative. Compare Screw the Rules, I Have Connections!.