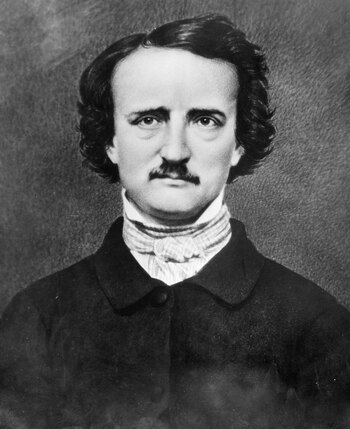 The world's most famous daguerreotype.
"Where was the detective story until Poe breathed the breath of life into it?"
— Sir Arthur Conan Doyle, speech at the Authors' Club in London (March 1, 1909)
Advertisement:

Edgar Allan Poe (born Edgar Poe; January 19, 1809 – October 7, 1849) was an American writer, the inventor of the modern horror story and the modern detective story, as well as an early influence on the science fiction genre.

Poe believed that all stories should be short enough to be read in one sitting.

He also believed that the perfect subject for poetry is the death of a beautiful young womannote To be precise, he thought it perfect because it married the "most poetical subject"— Beauty— with the "most poetical emotion"— Melancholy. (which should tell you volumes about his own love life, not to mention the death of his mother and his adoptive mother at a young age). After the death of his parents, he was taken in by a foster family and spent some of his childhood abroad, spending a couple of years in a boarding school in England before returning to America at the age of 11. After squandering his college tuition money gambling, he enlisted in the US Army at the age of 18. He published his first work, Tamerlane and Other Poems, while serving as an artillery man at Fort Independence, Boston, Massachusetts. After securing an early discharge, he was accepted to the Military Academy at West Point, but gave up on it after a falling-out with his adoptive father, though he was popular enough that his fellow cadets chipped in enough money to help him publish another book of his poetry. Moving to New York, he became a full-time writer, and struggled financially for the rest of his short life until his death in Baltimore, Maryland at age 40.

Poe's life was plagued by rifts with his adoptive father, deaths of numerous loved ones, and alcoholism. Typical. He was also a noted Caustic Critic, which earned him a few enemies and tarnished his reputation, despite the critical acclaim that he received.

. The Life and Letters of Edgar Allan Poe by James Albert Harrison actually provides evidence from eyewitness accounts that suggest he wasn't quite an alcoholic at all. That said, even without it, he still had way more than enough "inspiration" for his work.

He also created the first notable introverted Great Detective character of C. Auguste Dupin who, operating independently of the police force, solved crimes via his great observation and reasoning skills while assisted by his Heterosexual Life Partner and roommate, who also narrates the stories. Sound familiar?

Along with his detective fiction and poetry, Poe is celebrated for his wonderfully gothic and macabre horror fiction which did away with traditional themes of simple ghosts and witches. These stories would go on to influence dozens of authors who would expand and refine the genre, and they were loved most greatly by a certain Mr Howard Phillips Lovecraft, an introverted fellow who'd go on to set the tone of horror fiction for the rest of the 20th century. Poe also wrote quite a lot of humor (often dark humor, admittedly), which may come as a surprise to those who know his works only from assigned readings in high school.

Poe was a Baltimorean, and "The Raven" is the namesake of the Baltimore Ravens.

His only novel was The Narrative of Arthur Gordon Pym of Nantucket. That he had written a novel while preferring short stories could be explained seeing the Troll entry.

His works were the inspiration for the first album from The Alan Parsons Project and for a series of PC mystery games called the Dark Tales. His work is also one of the inspirations for the Mount & Blade Game Mod Solid & Shade.

Works by Edgar Allan Poe with their own trope pages include: