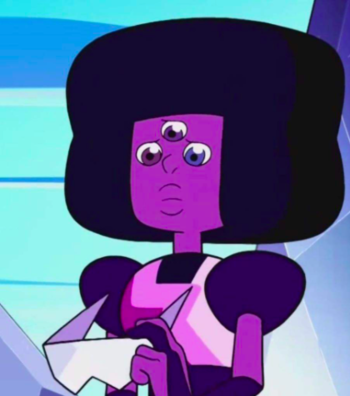 In much the same way that Blind People Wear Sunglasses, characters with strange eyes often wear some form of covering to disguise them in public: villains might use them to conceal their "Uh-Oh" Eyes, cyborgs may wear them to hide ocular prosthetics from squeamish civilians, and the subtler breeds of magical beings can use them to pass as human - especially in settings where there's some kind of Masquerade in place.

Among the most popular variations on this theme involve dark sunglasses and wraparound shades - justifying the use of Sunglasses at Night - but in truth, the coverings can include almost anything so long as they conceal the inhuman elements of their eyes: spectacles, contact lenses, blindfolds, domino masks, glass eyes, illusions, or even Blinding Bangs.

In live-action works, this often doubles as Obscured Special Effects.

A subtrope of Hide Your Otherness.