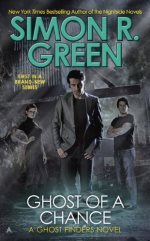 From left to right: Melody, J.C., "Happy" Jack Plamer
A six-book series by Simon R. Green, Ghost Finders follows closely in the same vein as his two previous urban fantasy series (Nightside and Secret Histories). It follows the adventures of a team from the Carnacki Institute, which wants to Do Something about ghosts (and other weirdness) - JC Chance, a perpetually optimistic, arrogant blowhard (who always turns out to be right, in the end); Melody, the team's tech guru who turns into a Lovable Sex Maniac after hours; and Happy, a "class 11 telepath" on enough drugs to empty out a pharmacy, who can almost never think positively (unless on certain types of the aforementioned drugs).
Advertisement:

On their tails are members of the rival group, the Crowley Project: agents like Natasha Chang, a sadistic Rich Bitch of a telepath, and her sidekick (against her will) Erik Grossman, a physically and socially repulsive scientist with similarly repulsive scientific interests. At their backs, the indomitable Catherine Latimer, uncompromising head of the Institute who won't give in to bureaucratic foot-dragging, hidden traitors among her own senior agents, or whinging pleas for overtime. And on every side, the teeming forces of the supernatural, ready and waiting to overthrow the safe-and-sane daylight world for the legions of unquiet dead ... or the far more inhuman, destructive powers that would use ghosts and Ghost Finders, alike, for their own ends.

The series books are -

Green's micro-budget horror film, Judas Ghost, features another Carnacki Institute team and is a direct spin-off of this series.