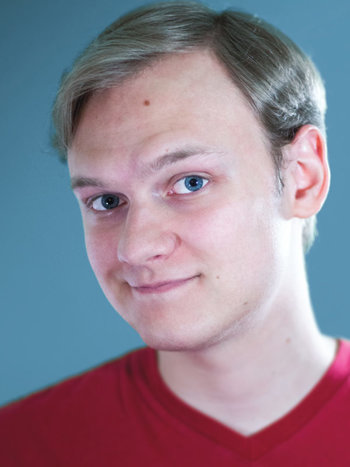 Bryson Baugus (born August 24, 1994 in Midlothian, Texas) is an American voice actor, who provides voices for a number of English versions of Japanese anime series. He usually voices young boys.

Bryson Baugus started acting in stage shows when he was 7-years-old. He loved performing so much that he continued to improve on his craft, going on to do productions in high school, college, and community theater shows as a teenager and young adult. Some of the shows he has been involved with in the past include American Idiot (Obsidian Art Space), Les Misérables (The Stafford Center), Fortinbras (Horton Foote Theatre), The Cripple of Inishmaan (2011 One Act Play Competition), and many more! He has also had the honor of providing voices for a few English-dubbed Japanese anime through Sentai Filmworks in Houston. He is currently pursuing a BFA in Acting/Directing at Sam Houston State University in Huntsville, Texas.