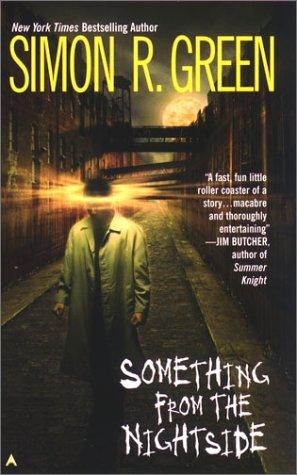 The Nightside. That square mile of Hell in the middle of the city, where it's always three AM. Where you can walk beside myths and drink with monsters. Where nothing is what it seems and everything is possible.
Advertisement:

An Urban Fantasy series by Simon R. Green, the Nightside series chronicles the adventures of the mysterious John Taylor in the titular Nightside, a hidden world in the middle of London wherein all manner of nasties lurk. Fallen gods and Eldritch Abominations lurk down every dark alley in a place seemingly made entirely out of dark alleys. (And gaudy neon.)

John has a gift: using his Inner Eye, he can find anything. Lost artifacts, the mystical strings binding some otherworldly horror to reality, your missing keys, anything. Naturally, this gets him into all sorts of trouble.

The series spans twelve books, with John Taylor as the protagonist. The books are:

A compilation of short stories from the same setting, Tales From The Nightside, was released in 2015.

Green's final Nightside novel, Night Fall, was released as a Doorstopper crossover with his Secret Histories series, and (barring future short stories) serves as a Grand Finale for both.