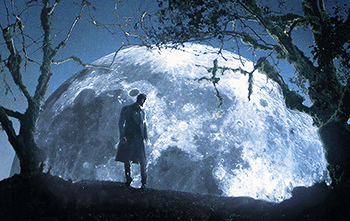 "All right, this is just getting ridiculous. Is the Moon just larger in Japan?"
— Unskippable, on Onimusha 3: Demon Siege
Advertisement:

Depictions of the Moon in fiction vary, but it's not supposed to... grow. In fiction, the Moon can be twice as large on the horizon compared to the sky, and even the Moon in the sky is larger than it really is! The Moon will dominate the scene as a clue to the time of day and effect on the story.

In Real Life, the Moon is about 30 arc-minutes across when seen from the Earth's surface, about the size of a small coin held at arm's length. The Supermoon

, a phenomenon where the Moon is full at the same time as its perigee (closest approach to Earth in its orbit) can also make the Moon appear substantially larger in the sky, though not to the extent seen here.

Your eyes can create the Moon illusion

, an optical illusion which causes the Moon to appear larger near the horizon than it does higher up in the sky, but in fiction this is taken to the extreme.

Subtrope to Weird Moon. See also Full Moon Silhouette, which can overlap if the foreground characters are too large/close for the effect to be anything other than artistically created. For examples in fiction of something being as big as the Moon, see That's No Moon.