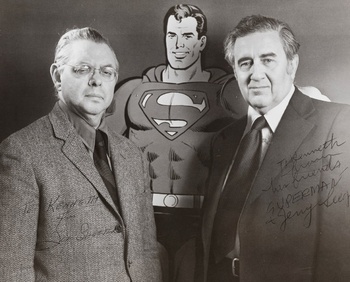 Shuster on the left, Siegel on the right.
Advertisement:

Both were young Jewish boys who grew up in Cleveland, Ohio (Jerry was born and raised there, while Joe was born in Toronto, Canada and he and his family moved to Cleveland when he was 9) and they shared a love of science fiction and adventure stories. The two were trying to make ends meet during The Great Depression through writing and illustrating short stories and selling them to publishers, but were rejected each time. During that period, Shuster produced a five-issue fanzine called Science Fiction: The Advanced Guard for Future Civilization. There, Siegel and Shuster created a short story titled "The Reign of the Superman", about a mad scientist who grants a vagrant with telepathic abilities through an experimental serum and how the empowered man wished to use his powers to achieve world domination.

Siegel wanted to refine the concept of the "Superman" and decided to make him a hero who used his special powers to help mankind instead of conquering them. Thus in 1933, the duo created a comic about the newly heroic character and tried to sell it to various publishers as a newspaper comic strip. Despite all their hard work, they were rejected each time. However, hope was not lost.

As Siegel and Shuster found work writing and drawing comics at National Allied Publications (soon to be known as DC Comics), co-owner Jack Liebowitz needed an exciting lead feature for their newest Anthology Comic, Action Comics. Soon, someone he knew found the rejected "Superman" strips and Siegel and Shuster were told that, if they paste them into a 13 page story, then National would buy the character. Soon enough, they had cobbled together the strips, rewrote and redrew them, added more story material to it and the rest is comic book history....

Works by Jerry Siegel with their own trope pages include:

Tropes common throughout their comics include: