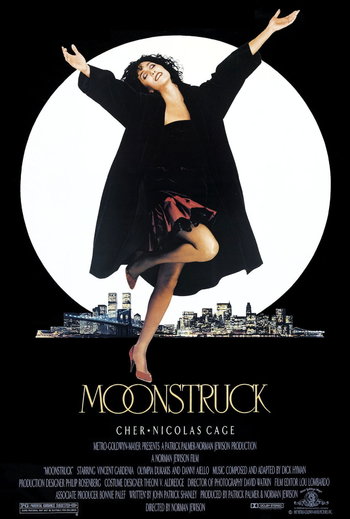 "Why do men chase women?"
"The storybooks are bullshit!"
— Ronny Cammareri
Advertisement:

The story centers around your typical Italian-American family living in Brooklyn. Loretta Castorini (Cher), a widow in her late thirties who has moved back in with her parents since the death of her husband, accepts a proposal from her bumbling boyfriend Johnny (Danny Aiello), who suddenly has to leave in order to visit his dying mother in Sicily. While he's away, Loretta tries to convince Johnny's estranged brother Ronny (Cage) to give up their feud and come to the upcoming wedding, but accidentally falls for him. At the same time, Loretta's father (Vincent Gardenia) is having a secret affair while her mother (Olympia Dukakis) ponders the skirt-chasing mentality of men. Hilarity Ensues.

Notable for getting Cher, Dukakis and screenwriter John Patrick Shanley (the future playwright of Doubt) Academy Awards. Notable further for the fact that the acting awards, for a spot-on depiction of a big Italian family, all went to the non-Italian actors and screenwriter.note Cher's heritage is Armenian, Irish and Cherokee: Dukakis was second generation Greek; Shanley is Irish-American. The Italian actors were Vincent Gardenia, a Neapolitan; he did get nominated, but didn't win; Italian-Americans Nick Cage and Danny Aiello.