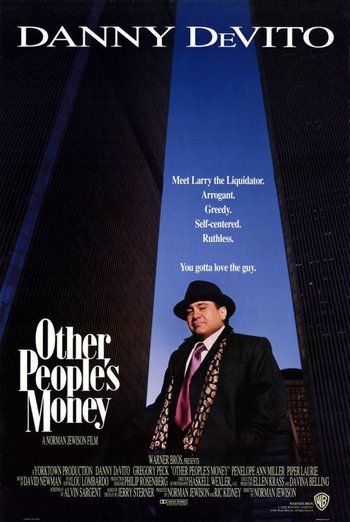 "I love money. I love money more than the things it can buy. There's only one thing I love more than money. You know what that is? OTHER PEOPLE'S MONEY."
— Larry the Liquidator
Advertisement:

Lawrence Garfield, otherwise known as "Larry the Liqudator" (DeVito), is an apparently heartless—but secretly lonely—corporate raider launching a hostile takeover of a small Rhode Island company that makes wire and cable. The son of the founder of the company, Andrew "Jorgy" Jorgenson (Peck), reaches out to his stepdaughter Kate (Miller), an attorney, to stop him. Larry soon becomes smitten with Kate, leading him to try and beat her and woo her at the same time.