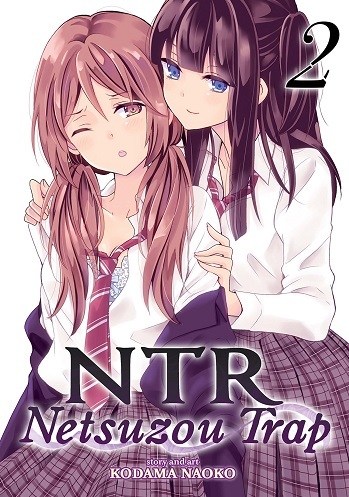 NTR: Netsuzou Trap is a yuri shoujo manga series by Kodama Naoko. The story centers around two high school girls named Yuma Okazaki, and Hotaru Mizushina. Yuma and Hotaru have been best friends since childhood; Yuma would protect Hotaru from bullies, and made it her job to look after her. Now the two are second year high school students, and Hotaru is anything but innocent. Yuma gets her first boyfriend but is nervous about it, so a more experienced Hotaru suggests a "dress rehearsal" to help her out. The helping out later on leads to a deep kiss with Hotaru, who says that Yuma now knows how to kiss a guy. This leaves her thinking though about how much better this kiss was then the one she had shared with her boyfriend. As time goes on, Yuma worries that her boyfriend will find out what is going on between her and Hotaru, and cannot explain these "strange" feelings she has when she is with her.

The series started in November 2014, and appears as an ongoing serial in the monthly manga magazine Comic Yuri-Hime. An anime television series adaptation by Creators in Pack aired in Summer 2017 (with 10-minute episodes) and was simulcast with subtitles by Crunchyroll. Outside of Japan, the series is published in North America by Seven Seas Entertainment.

In 2017, the series received a male-centric spinoff in Gateau, titled Takeda and Fujiwara. This spinoff follows the main series girls' boyfriends with some Homoerotic Subtext here and there.

Tropes presented in the work include: