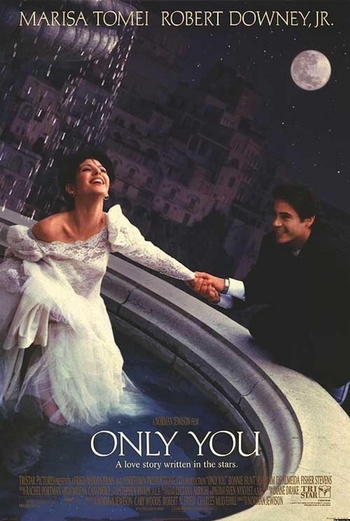 As a young girl, Faith Corvatch asks a Ouija Board what the name of her soulmate will be: the ouija board spells out the name 'Damon Bradley'. Faith's belief that this 'Damon' is her true love is later cemented when she and her friends visit a carnival Fortune Teller who confirms that 'Damon Bradley' is the name of the man she will marry.

The film then time skips fourteen years- Faith (Tomei) is now a school teacher and Wide-Eyed Idealist, albeit one who has given up on finding 'Damon' and is about to marry Dwayne, a boring podiatrist. However, all this is thrown up in the air when Faith overhears an answering machine message left for Dwayne by his old friend who is about to leave town, Damon Bradley. Faith drops everything and decides to chase after him to Italy, accompanied by Kate (Bonnie Hunt), her unhappily married sister-in-law. Faith eventually runs into Damon in Rome and after a romantic evening together... discovers that 'Damon' is actually Peter (Downey), a buyer for a chain of shoe stores. Desperate to stay around Faith, Peter offers to help her track Damon down.

Only You provides examples of: