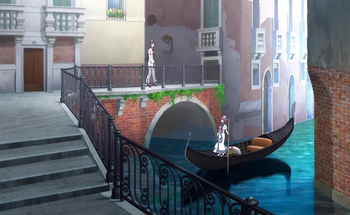 So much water, you could ride a walrus to work.
"They call it the Walls of Water, but it's not just the walls - it's the whole damn city."
— Gladiolus Amicitia, on Altissia, Final Fantasy XV
Advertisement:

Perhaps it's for some aesthetic reason, or perhaps it's simply because they're so unusual — for whatever reason, cities with canals instead of streets are a very popular setting, especially in fantasy. In stories set in the real world, or some alternate universe sharing its geography, this city is, of course, Venice — there are actually other cities and towns with lots of canals, but none are quite as famous or as glamorous, especially since Venice renewed their efforts to make everything really nice and clean in the 1980s. Meanwhile, other worlds often have cities which are suspiciously similar to Venice, usually (though not always) within an Italy-like country. Pretty, old-fashioned European-style architecture and gondolas are optional, though common.

Besides Venice, a number of real cities do actually have canals—Amsterdam is the second most-famous Western example—though most lack Venice's aesthetics due to their most common, ahem, industrial function.

"An Opera of Fear"

This being Venice, Italy, the whole level is built around this.

"An Opera of Fear"

This being Venice, Italy, the whole level is built around this.