Film / Nothing in Common 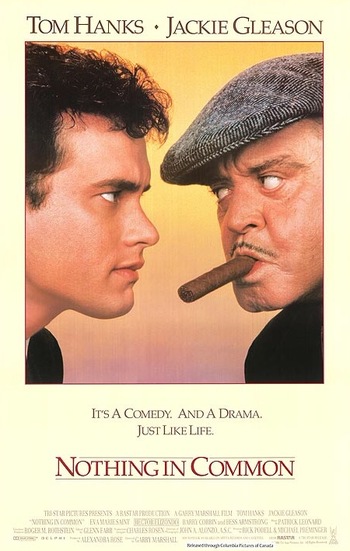 "Tomorrow, I'm doing a commercial about a family that loves each other, cares for each other. I'm faking it."
— David Basner
Advertisement:

David Basner (Hanks) is a top-flight Chicago ad exec who's doing well in his life; he's got a good chance to land Colonial, a major airline account, and becomes attracted to Cheryl Ann Wayne (Ward), the daughter of Colonial's owner, Andrew Woolridge (Corbin). But his personal life is turned upside down when his father, Max (Gleason) calls one night to tell him David's mother, Lorraine (Saint), has just walked out after 36 years of marriage. David must try to juggle both his career and personal life while trying to help both of his parents out, and trying especially to repair his relationship with his father.

Notable for being Tom Hanks’ first dramatic film during his post-Splash/pre-Philadelphia period when Hanks was mostly known for doing comedies.

Adapted into a 1987 TV sitcom that lasted all of seven episodes.