Film / Only the Valiant 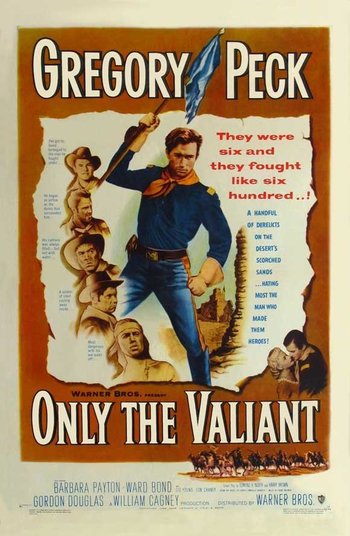 Only the Valiant is a 1951 Western film directed by Gordon Douglas and starring Gregory Peck, Barbara Payton, and Ward Bond. It was based on a 1943 novel of the same name by Charles Marquis Warren.

Captain Richard Lance (Peck), a West Point graduate, arrives at Fort Invicible, a fortification set up in the New Mexico Territory, soon after a band of Apache assaulted the fort and captures their leader, Tucsos (Michael Ansara). Lance is ordered to assign an officer to command an escort to take Tucsos to a larger post. Lance decides to lead the patrol himself, but at the last minute, he is told to stay at the fort in case of an Apache attack, and is ordered to assign another popular officer, Lieutenant Holloway, to lead the small group of men escorting Tucsos. The Apache ambush the group, kill Lieutenant Holloway and free Tucsos. The men at the fort blame Captain Lance, unaware of the orders he received, believing that his decision to assign Lieutenant Holloway to the dangerous mission was for a personal reason, as both officers were vying for the affection of the same woman, Cathy Eversham (Payton). Lance's standing with the soldiers at the fort only gets worse when he assembles a group of misfit cavalrymen to hold off the rampaging Indians at the ruins of Fort Invincible, which is considered a suicide mission.