Film / One Touch of Venus 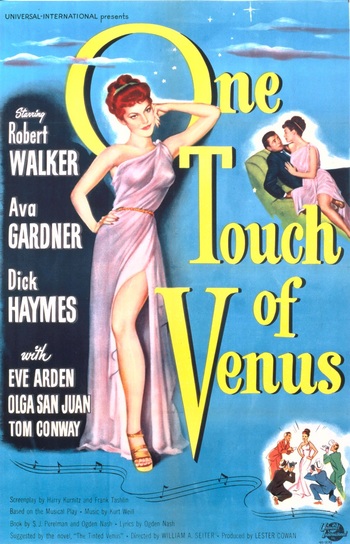 "Try to reason about love and you will lose your reason."
"To Venus, goddess of love! May she stay on the job and take care of us all!"
— Molly Grant
Advertisement:

One Touch of Venus is a 1948 romantic comedy-fantasy film loosely based on the Broadway musical of the same name, directed by William A. Seiter and starring Robert Walker, Ava Gardner, Dick Haymes, and Eve Arden.

The plot remains the same: a statue of the Roman goddess Venus comes to life and shakes things up in an everyman's life. But in contrast to the play's satire of sexual mores, the film takes more of a Screwball Comedy approach. Most of the original score isn't contained.