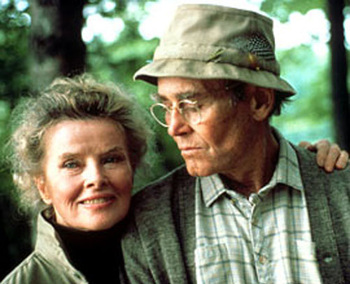 "Listen to me, mister. You're my knight in shining armor. Don't forget it. You're going to get back on that horse and I'm going to be right behind you, holding on tight and away we're going to go, go, go!"
— Ethel Thayer
Advertisement:

A 1979 play by Ernest Thompson, On Golden Pond is best remembered for its 1981 film version directed by Mark Rydell. It starred Henry Fonda and Katharine Hepburn (both of whom won Oscars for their work, his first and her fourth respectively), along with Jane Fonda (appearing alongside her father for the first and only time). Thompson also won an Oscar for adapting his play to the screen.

Retired professor Norman Thayer, Jr. and his wife Ethel head off to their lake-house on Golden Pond for the summer. They're visited this year by their estranged daughter, Chelsea, who brings with her her new boyfriend Bill and his son Billy. The two leave Billy with Norman and Ethel for a few weeks as they go to Europe, a situation Billy resents. Over time, however, Billy's influence softens Norman's grumpy heart, which may help heal the rift between him and his own daughter.