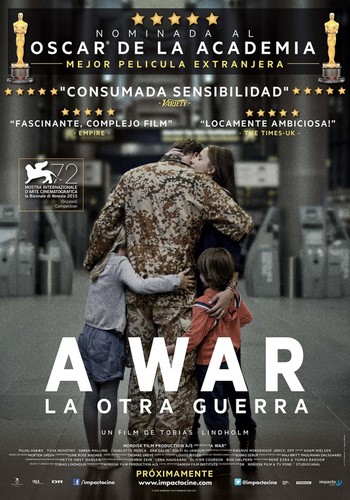 A War (Kriegen) is a 2015 film from Denmark directed by Tobias Lindholm.

Claus (Pilou Asbæk, aka Euron Greyjoy on Game of Thrones) is the commanding officer of a Danish platoon on the front lines of The War on Terror in Afghanistan, fighting the Taliban. Morale is low. The men can't see any point in endless patrols against the Taliban that result in a steady stream of casualties for little gain. Claus's own morale is pretty low as well, given his long separation from his wife Maria and their three children. Back at home, Maria is struggling to raise the kids by herself.

One day a man from the nearby village, who sought help from Claus's men for his sick daughter, comes to the base and asks for protection from the Taliban. Claus leads his platoon out to the village the next morning, only to find that the man and his whole family have been killed during the night. Only seconds after they realize this the platoon comes under artillery bombardment from the Taliban, who were lying in wait. Pinned down, with a man seriously wounded, Claus calls for an airstrike on the Taliban position—an action that has tragic consequences.