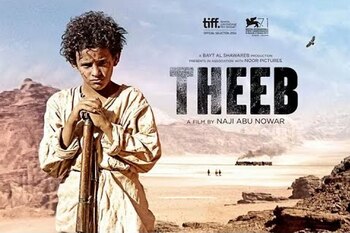 Arabian Peninsula, Hejaz province, 1916. Theeb is a boy of maybe 12, a member of the Howeitat tribe of nomadic herders. One day Theeb is surprised to see an Englishman, wearing British Army khaki, visiting their tribe. The Englishman's interpreter explains that he needs a guide to take him to the Hejaz railway

. Theeb's older brother Hussein is tabbed to guide the foreigner.

and will brook no delay, so they take Theeb with them. The Englishman has a mysterious wooden box and gets very angry when Theeb touches it.

They never make it to the railway. Disaster strikes, and Theeb winds up left alone in the desert. Theeb is in dire peril but possible salvation arrives—in the person of a murderous black-clad bandit.