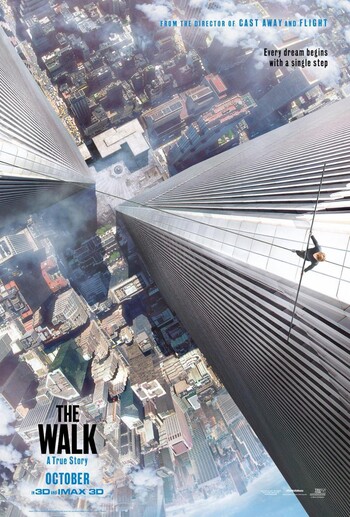 "This isn't a game, Philippe. One mistake out there and you're going to die."
US Customs Agent: [seeing his equipment] And what's all this for?
Philippe Petit: I'm going to hang a high wire between the World Trade Center Towers... And walk on it.
US Customs Agent: Right. Good luck. Next!
Advertisement:

The Walk is a 2015 dramatic film directed by Robert Zemeckis and covering Philippe Petit's story of how he conceived of, planned for, and pulled off illegally walking between the two towers of the World Trade Center. Philippe is played by Joseph Gordon-Levitt.

The Walk contains examples of:

"Well, these passes, they have a date on them, a date when they expire. But on my pass, Mr. Tozzoli, he crossed out the date, and he wrote on it, 'Forever'."