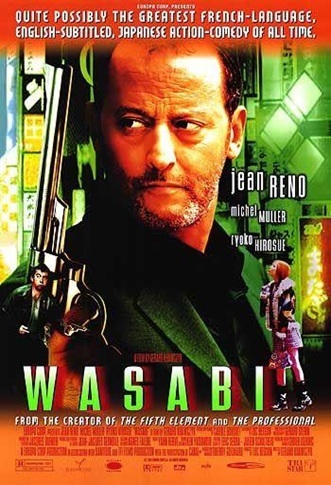 Wasabi is a 2001 French action comedy directed by Gérard Krawczyk, written and produced by Luc Besson and starring Jean Reno, Michel Muller and Ryōko Hirosue. In France it has the subtitle La petite moutarde qui monte au nez ("The little mustard that gets right up your nose").

French police commissioner Hubert Fiorentini is, in his words, an average 47-year old dude who wouldn't hurt a fly. Unless said fly is a criminal. He's a damn good, if unorthodox cop, plays golf on weekends and has an attractive woman pursuing a relationship with him. But he can't get his old flame out of his head: Japanese government agent Miko, whom he hasn't seen in 19 years. Everyone he knows is telling him it's time to move on.

One day Hubert receives a call from Miko's lawyer informing him of her death. He's invited to Japan for the reading of her will, as he's the only one she's left anything. When he gets there, he discovers two things. One, he has a 19-year old daughter by Miko, the bratty, fiery and independent Yumi. Two, Miko didn't die of natural causes. With the help of his Old Friend Momo, who still works in Japan for French Intelligence, Hubert must protect his daughter from some nasty Yakuza gangsters while unraveling a series of clues Miko left to help Hubert find the truth.