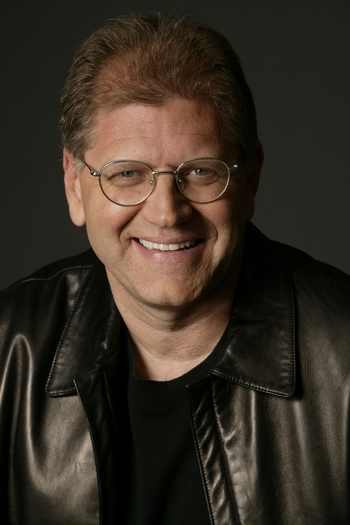 Robert Lee Zemeckis (born May 14, 1952) is an Academy Award-winning American director, most famous for the Back to the Future trilogy, Who Framed Roger Rabbit and Forrest Gump.

Zemeckis first hit it big in The '80s directing the light-hearted adventure film Romancing the Stone. He followed it up with Back to the Future (which The Bobs had written a few years before, but couldn't get made) and Roger Rabbit. At the end of the decade, The Bobs made sequels to Back to the Future to please Universal's executives. Starting in The '90s, Zemeckis went on to direct more "serious" fare such as Forrest Gump, Contact and Cast Away.

At the Turn of the Millennium, Zemeckis made several animated films with performance capture technology, giving us The Polar Express, Beowulf and A Christmas Carol. Responses to these films are mixed, mostly due to how disturbing they all looked, and this phase of his career is now considered his Dork Age. After the box office cataclysm that was Mars Needs Moms caused his studio to shut down, he then had to head back to live-action cinema. In 2012 he released Flight starring Denzel Washington, his first live-action movie in 12 years (and his first R-rated movie as a director since 1980's Used Cars - The Bobs' script The Looters, written in the pre-BttF era, was made by Walter Hill in 1992 as Trespass). It was a critical and commercial success, and helped usher in a Career Resurrection.

Allied starring Brad Pitt and Marion Cotillard was released in 2016. This was followed with Welcome to Marwen, starring Steve Carell and released in December 2018, and an adaptation of The Witches, starring Anne Hathaway and Chris Rock, released in October 2020. He is also attached to direct the sci-fi film Steel Soldiers and a remake of Pinocchio.

Common tropes in his films: