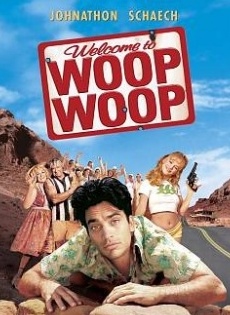 "There's three rules; No private property, no one is allowed to leave, and you don't do the dirty deed with your next of kin."
— Daddy-O
Advertisement:

Welcome to Woop Woop is a 1997 Australian black comedy film. Directed by Stephan Elliott, it was his follow-up to The Adventures of Priscilla, Queen of the Desert.

Teddy is an American man selling Australian Bush Cockatoos on the NYC black market to pay off a debt. When men come for the money, shots are fired and his birds are set free in the chaos. Teddy follows them and runs away to hide in Australia. There he meets Angie, who he thinks is the girl of his dreams - until she knocks him out, and brings him home. He wakes up trapped in Woop Woop, an isolated town with a population of 50 and every one is family. The town is run by Daddy-O, Angie's father, who very aggressively enforces the three town rules (see quote). The only entertainment is "Rogerson Hammerstein (sic)", the only snacks are pineapple chunks, and the town industry is producing canned dog food made from kangaroo meat.