Film / The Adventures of Priscilla, Queen of the Desert 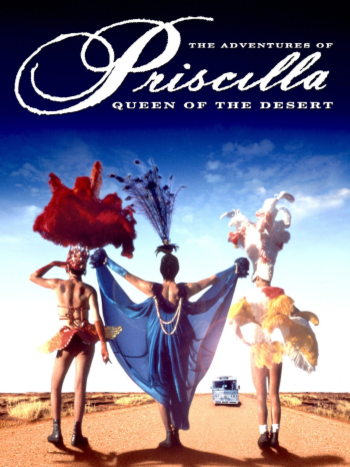 "That's just what this country needs: a cock in a frock on a rock."
— Bernadette
Advertisement:

In the wake of Bernadette's husband's death, Tick agrees to do a drag gig for his estranged wife in Alice Springs, bringing Bernadette and Adam along with him. Along the way they crack stereotypically cutting jokes, reveal secrets about themselves, drink themselves stupid, party with a camp of Aborigines in the desert, meet an Asian woman with interesting talents and pick up her repairman husband Bob for the ride, experience intolerance and danger from violent locals, and, of course, practice their drag show.

A year later Hollywood would tackle the same basic premise in To Wong Foo, Thanks for Everything, Julie Newmar