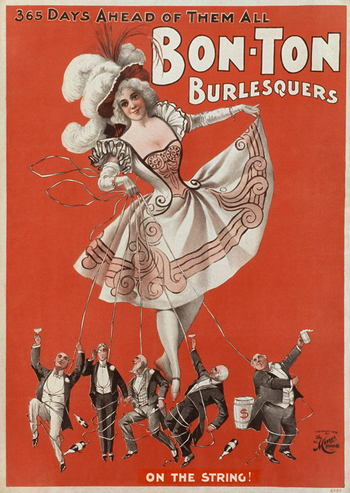 The word "burlesque" is derived from a Romance language term meaning "to send up". Burlesque theatre originated in the UK and US in the 19th century as a form of broad satire and parody aimed at low to middle class audiences, poking fun at the "highbrow" entertainments and social activities of the upper classes. During the Victorian period, it became increasingly common for roles to be played by attractive women, dressed more "daringly" than Victorian convention normally permitted. The women quickly became the main attraction, and costumes became more revealing to the extent permitted by local laws. As in Vaudeville and Music Hall settings, music and variety acts became staples of Burlesque shows. The tone often became suggestive, even shading toward bawdy, although outright vulgarity, obscenity, and nudity were avoided; the intent was to spoof and titillate, not offend. While Vaudeville tended to be dominated by individual acts; Burlesque shows depended on troupes travelling a circuit. It was generally looked down on as "low" humour by Vaudeville performers, and a last resort for the "washed up"; but many performed in Burlesque troops under pseudonyms, as the work was typically more steady and reliable.

Burlesque comedy was typically broad and low; with a strong emphasis on Slap Stick and sexual innuendo. The lead comedian was known as the "top banana"; and many well-known comedians started in Burlesque — such as Bob Hope, Red Skelton, and Milton Berle — before crossing over into movies, radio, or the fledgling television industry. One of the most famous classic Burlesque comedy routines is Abbott and Costello's Who's on First?.

While not originally the focus, sexual titillation became increasingly part of the landscape of Burlesque; however, the striptease remained a "back room" affair. The death of the Burlesque circuits in the 1920s resulted in the already well-established striptease, or "hootchie cootchie dance" being incorporated by theatre owners as a gimmick to bring in audiences. Although music and comedy remained a large part of Burlesque, the striptease became the primary draw. The degree of nudity and types of dancing permitted were limited, not by artistic or modesty concerns, but by obscenity statutes, with the stereotypical "pasties and G-string" used to avoid violating local laws. Performers did occasionally go beyond what was permitted, up to and including full nudity; and raids and arrests were frequent occurrences. A few places banned Burlesque altogether. This form of Burlesque was popular from the '20s until the '60s, peaking during World War II and the post-war '40s, finally declining in the '50s.

Many striptease dancers incorporated elaborate gimmicks into their acts, many of them artistic and/or comedic; and some parodied celebrities. As the form declined in the '50s, a few became minor celebrities in their own right; and just as many comedians moved on to Hollywood, so did a few of the more popular dancers. Some of those who managed to make a showing on the silver screen were Gypsy Rose Lee, Bettie Page, Tempest Storm, and Lili St. Cyr. Several movies were made which featured them; but these were generally highly bowdlerized versions of the performances, or low-budget indie productions.

With the legalization of hardcore pornography in the 1960s, Burlesque lost its appeal and the theatres either closed or began showing pornographic films. A few remained, with performers playing up the artistic or comedic aspects; but they typically didn't last long.

The modern Burlesque Revival (sometimes referred to as Neo-Burlesque or "Burlycue") started in the late 1990s; and is based predominantly on a Hollywood History version of Burlesque. It tends to focus entirely on the striptease, dropping the comedy and music aspects. Many performers and troops also incorporate themes of body-acceptance and Post-Modern Feminist or New Age themes of female empowerment through sexuality. Peformances range from re-creations of period styles featuring a minimum of nudity or sexuality, often undressing only down to their underwear, to modern alterna-porn; with the majority emphasizing costuming, performance, and "tease" rather than sex.