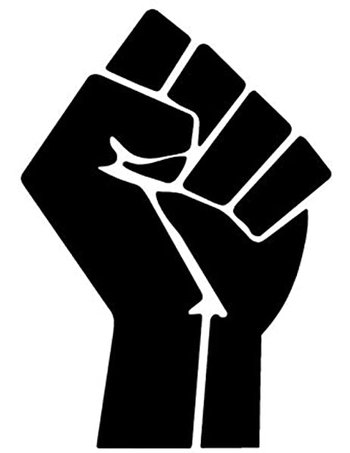 Black Lives Matter is a social and political movement created in response to police brutality and racially motivated violence against African-Americans in the United States. It arose in The New '10s. The movement is decentralized, meaning there is no single BLM organization or hierarchy; the name is more of a slogan used by an array of activist groups and individuals.

The hashtag #BlackLivesMatter trended on social media in 2013 after neighborhood watch coordinator George Zimmerman was acquitted for shooting Trayvon Martin, a black teen, in Sanford, Florida, under controversial circumstances. Nationwide protests erupted condemning racially-motivated violence following the widely-covered deaths of two unarmed black men, Michael Brown (Ferguson, Missouri) and Eric Garner (New York City, New York) a year later. These continued throughout much of the 2010s after more high-profile cases of African-Americans being killed in encounters with law enforcement. "I can't breathe", which were the last words of Garner and were also said by a number of other African-Americans killed in altercations with law enforcement, became a rallying cry. Similarly, after NFL player Colin Kaepernick knelt during the national anthem to bring attention to police brutality and his call to end institutional racism, "take a knee" also became a signature pose for Black Lives Matter.

The movement calls for an end not only to the maltreatment of black people at the hands of the justice system (such as overpolicing of minority communitiesnote Historically, this has its roots in the end of segregation following the Civil Rights Movement; affluent Caucasians who opposed integration moved into suburbs. It also has to do with the War on Drugs, which was (according to Nixon chief of staff John Ehrlichman

) originally conceived to criminalize minority populations and the left, helping to inflate urban crime rates and paint inner cities as ultra-violent, dilapidated and corrupt., police brutality, racial profiling, and unduly harsh prison sentences), but also various policies and institutions that they consider racist. It also calls for changes that could lead to black empowerment and liberation. Besides street demonstrations, activists also work on voter registration and empowerment, advocate for reforming and defunding the policenote the latter is widely misunderstood; real life cops deal with domestic disturbances, homelessness, mental health, and drug abuse on top of crime, and "defund the police" means redirecting some funds and responsibilities to health and social programs that address these issues at the root, and celebrate black success stories.

Despite the protests and several awareness that were made via social media, campaign, etc., the Black Lives Matter movement fell into relative obscurity until 2020 after the breaking news of the deaths of Breonna Taylor and Ahmaud Arbery. However, the straw that broke the camel's back was when the death by suffocation of George Floyd at the hands of a white officer Derek Chauvin and a group of police officers in Minneapolis, Minnesota went viral. The death of George Floyd lead to massive public backlash among all Americans. Celebrities and people of all sizes and contents began to denounce police brutality and systemic racism with some even blasting the current President of the United States for failing to "reduce police brutality and discrimination". As for businesses, most of American Corporates, organizations, TV networks, websites (including TV Tropes) expressed their solidarity via social media and some pledged to donate ranging from a hundred to even hundred million dollars. The NFL publicly apologized for not previously supporting its pro-Black Lives Matter players. Likewise, the NBA agreed to convert its stadiums into voting centers for lower-income communities after several players, most notably LeBron James, went on strike after the non-fatal shooting of Jacob Blake, which was also recorded. The activism of the movement also became a catalyst for many cultural and media changes that will be mentioned below.

As for why Black Lives Matter took off after Floyd's death, it could be due coinciding with the then-ongoing COVID-19 Pandemic. The pandemic closed down many entertainment venues like sporting events, concerts, and theaters so there isn't anything to distract people from the police killings and subsequent protests. Furthermore, COVID-19 disproportionately harms Black communitiesnote While 1/1200 White Americans have died, 1/800 Black Americans have died., which have already been languishing in substandard living standards caused by systemic racism, thereby leading to heightened tensions. Another major factor is the response of then-President Donald Trump to the protests; Trump's mismanagement of the pandemic and his militarized "law and order" approach, which included deploying the military and at one point ordering the tear-gassing of protestors so he could have photo-op, cost him much goodwill and made it seem like he didn't care about suffering of Black Americans. For many, the pandemic disrupted so much of normal life that it became impossible to ignore the movement.

Floyd's (not to mention many other African Americans) death and the subsequent mass protests both in the USA and abroad had an immediate effect on the media industry, itself stalled due to the pandemic; the events brought questions about the types of stories and performers Hollywood chose to elevate to the forefront. Black Lives Matter activists have criticized "copaganda

", a term used for media that overall portrays the police as an exclusively heroic force, misconduct as isolated, and crime (not inequality and social injustice) as the overall problem, for affecting public perceptions of police. Live PD and COPS, which put police officers front and center and were accused of portraying communities of color as violent and unsafe, were cancelled. Many network television shows involving police (eg. the Cop Show) promised to reexamine these portrayals or announced changes to that effect. In addition, noting an increased demand and new opportunities for black performers, some voice roles for black characters were recast with black voice actors.

While the support for BLM is massive still to this day, the long-term effects of this on mainstream pop culture remain to be seen.

Black Lives Matter itself has inspired many pieces of media, which by and large focus on black characters directly affected by the problems brought up by the movement. The plots often involve and condemn racial profiling and Police Brutality or feature a Miscarriage of Justice. These works analyze the roles race and privilege play in the justice system and how police affect society, as well as express anger and hope regarding where we go from here.

Depictions and references in media:

Other media related to the movement: