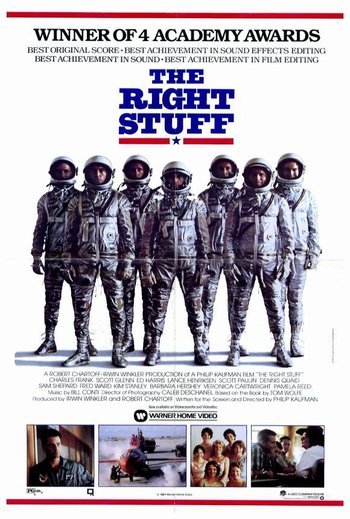 "Who's the best pilot you ever saw?"
Advertisement:

The Right Stuff is a 1983 film adaptation of Tom Wolfe's best-selling book, about the attempt to break the sound barrier and the subsequent Space Race. Directed and written by Philip Kaufman, it received eight Academy Award nominations, winning four.

Briefly considered to be a campaign promo for John Glenn's presidential aspirations in 1984 (though it actually didn't help much), the film provided breakout roles for a number of now-established actors: Scott Glenn (unless you count Urban Cowboy), Dennis Quaid (unless you count Breaking Away), Fred Ward (unless you count Escape from Alcatraz), and Ed Harris (unless you count Knightriders). And while Sam Shepard never worked too hard to advance his acting career, if he can be said to have had a breakout role, it was in this; his performance earned him an Oscar nomination for Best Supporting Actor. Among the others in the large ensemble cast are Lance Henriksen, Scott Paulin, Barbara Hershey, Veronica Cartwright, Pamela Reed, Scott Wilson, Jeff Goldblum, and Harry Shearer.

Although the movie is centered around the men and their fast, expensive, and dangerous toys, the women in the movie receive a great deal of character development, from Pancho Barnes and Nurse Murch to all of the astronauts' wives.

Another adaptation of the novel, an 8-part miniseries produced by National Geographic, premiered in 2020 on Disney+.