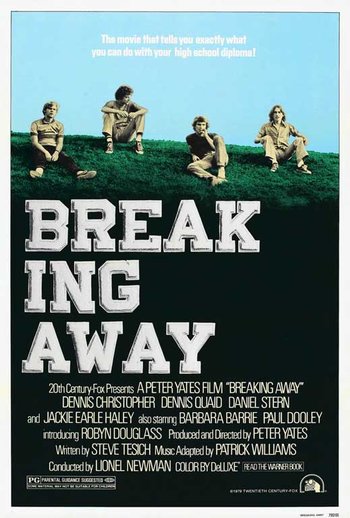 In Bloomington, Indiana, Dave Stohler (Christopher) and his friends — Mike (Quaid), a former star high school quarterback; Moocher (Haley), who's kind but has a Hair-Trigger Temper; and lovable loser Cyril (Stern) — mostly hang out and swim at the local limestone quarry. They can't afford to go to college (the local college is Indiana University), and they're looked down on by the students, who call Dave and his friends "cutters" (they're sons of the stone cutters who built the buildings at the university). In turn the cutters, particularly Mike, have a large chip on their shoulder toward the students.

Dave, however, is different in some ways from his friends. He was a sickly boy until he started riding around on a bicycle, and has since become a championship racer. He's also become obsessed with the Italian racing team, to the point where he starts acting Italian, to the bemusement of his mother Evelyn (Barbara Barrie) and the consternation of his father Ray (Paul Dooley), a used car salesman. It's also to the point where Dave passes himself off as an Italian exchange student when he becomes attracted to Katherine (Robyn Douglass), a student at the university. Dave is especially excited when he learns that the Italian team is coming to Bloomington for the university's annual Little 500 bicycle race. He's less excited when the cutters get entered into race, but events soon change his mind about that.

The movie won an Academy Award for Best Original Screenplay, and was also nominated for Best Picture, Best Director, Best Supporting Actress (for Barrie) and Best Adapted Score. While it was well received by critics, it wasn't a big hit at the box office, but it has become a favorite over the years, usually showing up on lists of best sports movies and most inspirational movies.