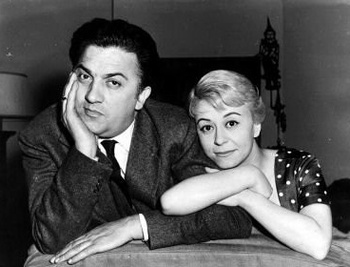 Fellini and his wife, Giulietta Masina, his sometimes leading lady
"There is no end. There is no beginning. There is only the infinite passion of life."
— Federico Fellini (1920-1993)
"The Imagination of a man like Fellini is so extraordinary that it seems more real than reality itself".
— Tullio Kezich, author of Federico Fellini: His Life and Work in the documentary Fellini's Homecoming
Advertisement:

Federico Fellini (20 January 1920 – 31 October 1993) was a famous Italian filmmaker. Today, he's most likely known for his "Felliniesque" style, that is, magical realism, but not enough to qualify. Surreal, but not too surreal. Strange, and yet highly sedate.

But above all, it is generally considered that Fellini is one of the more important filmmakers to come out of the neorealist movement, eventually abandoning those roots and moving into the world of movie artifice. Or rather he returned to his roots. Before his career in movies, Fellini worked as a cartoonist, a writer for Italian photo-novels (called fumetti), which were comic-books with professionally shot photographs with models instead of panels. He also owned a gag shop in Rome which allowed him to befriend many famous comedians such as Alberto Sordi. When Roberto Rossellini cast Sordi against type in his serious film, Rome, Open City, he hired Fellini as a dialogue writer. Fellini worked with Rossellini on many major films, such as Paisan, and even acted in the controversial short film, The Miracle. Eventually Fellini started directing films himself. His earlier films were more sober and realistic — Nights of Cabiria and La Strada — both starring his wife even received nominations for Oscars for Foreign Films. His career really took off with La Dolce Vita, a worldwide box-office hit.

After he switched to color in the mid-60's, Fellini stopped suppressing his imagination and made a bunch of "What on Earth is going on right now?" movies. At the time, most of them were dismissed by critics and several fans, his universally-loved semi-autobiographical masterpiece Amarcord being the exception. Many of his fans, however, heartily and readily agree that his color films are important; in recent times, some such as Juliet of the Spirits, Satyricon, Rome, his version of Casanova, And the Ship Sails On, and Intervista are gaining stature as being the most mature works. There are a very high number of movie critics and historians who would argue that his "weird" period is the best of his career.

While his films are what make the artist, his life was equally fascinating, living through the time of the fascists, becoming a journalist and cartoonist, writing scripts with the neo-realists, becoming a celebrity in Italy by creating the morally "indecent" La Dolce Vita (where the term paparazzi comes from), supposedly having many affairs (including one with his actress Sandra Milo), taking a bit of experimental LSD under supervision by Doctors and remarking that he was "unimpressed" with the experience, surrounding himself with clairvoyants and mystics, adopting the principles of Carl Jung, improvising large chunks of a movie even when there was a script, mistreating Donald Sutherland on the set of his Casanova (apparently, he claimed to have gained rights to film the story by having a seance with the spirit of the great lover himself), and shooting a movie on a cruise boat with almost no water where the ocean was made of plastic and characters remark that the sun looks so beautiful it must have been painted on the wall.

The city of Rimini, his birthplace, has named its airport after him.

Films directed by Fellini include:

Tropes in Fellini's movies include: