Film / Life on the Line 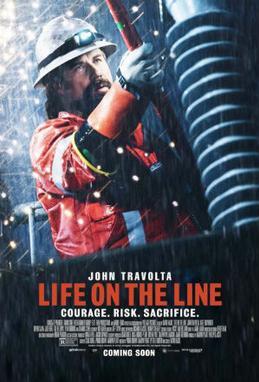 "I am my brother's keeper."
"Life is a series of collected moments and experiences that we gather over the course of time.
It’s more about the quality of life, than the height of the climb.
We are more than 1,000,000 strong, but together we act as one.
We walk the line whether hurricanes, tornadoes, rain, wind, or sun.
Our main mission is to protect the grid, even if one of us meets our maker. We are linemen, it is what we do, the credo we chant, you are your brother’s keeper."
— Beau Ginner
Advertisement:

Life on the Line is a 2015 Direct to Video disaster film directed by David Hackl, written by Primo Brown, Marvin Peart and Peter I. Horton, and staring John Travolta, Kate Bosworth, Devon Sawa, Gil Bellows, Julie Benz, Ryan Robbins and Sharon Stone. It premiered at the Napa Valley Film Festival on November 5, 2015 and was released on November 18, 2016, by Lionsgate Premiere. It tells the story of a group of Texan linemen who brave a severe storm to fix the electrical grid to bring back power to the county.

At least that's what the trailer promised.

Instead the storm only arrives during the climax. The rest of the film is about Bailey Ginning (Kate Bosworth) struggling with her relationship with Duncan (Devon Sawa) while dealing with her pregnancy and fending off her ex-boyfriend Ron (Matt Bellefleur); Beau Gunner (John Travolta) struggling to let go of his niece Bailey whom he raised since the death of her parents - his brother whose death he blames himself for and sister-in-law; Duncan starting a job as a lineman much to the anger of his alcoholic mother who was left destitute after her husband, a lineman, was killed and the displeasure of his new boss Beau who resents him for dating his niece; Carline (Julie Benz) befriending Bailey and suffering from marriage problems as a result of her husband Eugene’s PTSD from Iraq; and Eugene (Ryan Robbins) himself, a vet and lineman, suffering from flashbacks and suicidal tendencies and slowly suspecting his wife’s infidelity. All of these events make up the bulk of the film as it slowly builds up to the storm.