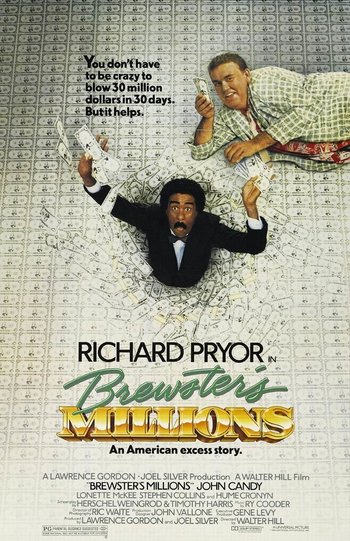 "I believe in being honest, Brewster. No bullshit. I'm stuck with you. But...we're gonna have some fun."
Advertisement:

Brewster's Millions is a 1985 comedy movie directed by Walter Hill and starring Richard Pryor and John Candy. It is adapted from the 1902 novel of the same name written by George Barr McCutcheon.

Pryor is Monty Brewster, an impoverished young man who inherits $30 million from a long-lost relative and also stands to further inherit $300 million. But the inheritance has a catch: to receive the $300 million, Monty must waste the entire $30 million in 30 days. He must end the challenge with no tangible assets whatsoever, with severe limits on possible outs like charity or purchasing items...and keep the arrangement a secret from everyone else. Monty wins the full inheritance if he pulls it off, but if he breaks any of the rules or fails to spend the $30 million in full, he gets nothing.

As Monty starts hemorrhaging money as fast as he can, he soon realizes a horrible truth: it's amazingly difficult to lose an incredible amount of money.note Well, under the conditions outlined in the will, anyway.