Just for the Heli of It 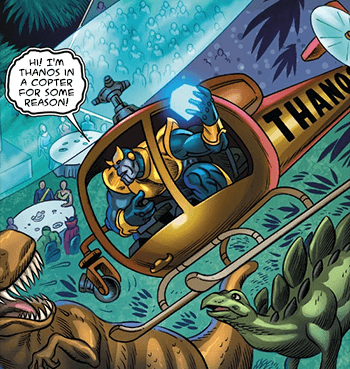 Pearl: Eight! We'll come get you in the chopper, so just wait up there with Cap, OK?
Marina: The heli? You think we need it?!
Pearl: There are only so many chances to use it. We can't let it go to waste!
— Splatoon 2: Octo Expansion
Advertisement:

Sure, helicopters are their own special brand of Cool Plane, but sometimes taking one to get somewhere seems a bit much. Using helicopters when there are perfectly good roads available? Expending emergency resources on a non-emergency, or something less than urgent? Demonstrating you have more wealth and importance than someone in a mere limousine? Sheer publicity value? For some people, the use of the helicopter is preferable or even quite reasonable, for others, not so much.

When this trope is operating, expect someone in-universe to question, criticize or ridicule the use of the chopper. This person may be unaware of all the reasoning behind the choice to use the chopper, or they may simply find it unconvincing, if not outright ridiculous. In either case, they will draw attention to what they consider the absurdity of the thing.

Simply having a particularly spiffy chopper with weaponry/gadgetry (which would fall under Cool Plane) is not this trope. Contrast this with instances where helicopters are expected (media about modern wars) or even practical (say, T.C.'s helicopter charter service in the multi-island state of Hawaii). Autogyros (which are essentially semi-powered rotary wing gliders), despite not technically being helicopters, are this trope, especially since they almost never appear except for cool value. When the use of the helicopter goes horribly wrong, that's Hellish Copter.