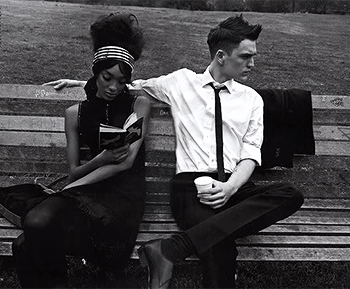 "I might date another race or color
It doesn't mean I don't like my strong black brothers!"
— En Vogue, "Free Your Mind"
Advertisement:

Black Man/White Woman couples, as portrayed in the media, are going to face taboo and historical connotations, whether played for comedy or drama. This trope, the inversion of the above situation, is connected to the idea a white woman should never date a black man. This bias bleeds into the personal lives of any black woman dating a white man by choice, as thanks to the history of sexual abuse of black women by slave owners, it's assumed any white man black woman pairing is detrimental to her instead of a genuine loving relationship. This can be seen in antebellum and slavery films such as Queen and Roots.

When these relationships are portrayed, two issues may work their way into the narrative:

See also Mighty Whitey and Mellow Yellow for a similar trope involving Asian women and white men — which often meets with better acceptance, at least from white men — and the gender-inverted version White Gal on Black Guy Drama. But Not Too Black can play into all these tropes. The Chief's Daughter is also a common trope in Black Gal on White Guy Drama. See Maligned Mixed Marriage.

A black woman's parents pretend to approve of her white fiance at Christmas dinner.

A black woman's parents pretend to approve of her white fiance at Christmas dinner.