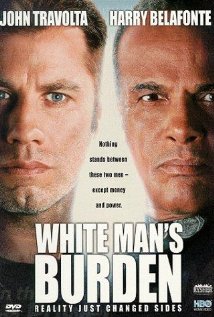 Two men at odds in a world turned upside down.
"White people are genetically inferior. Or they're culturally crippled. Or they're socially deprived. Those types of arguments mean absolutely nothing. The bottom line is very simple. These people are beyond help."
— Thaddeus Thomas
Advertisement:

White Man's Burden is a 1995 film starring John Travolta and Harry Belafonte in an alternate America in which blacks are the racial majority, and whites are a minority group. Travolta plays as Louis Pinnock, a factory worker, and Belafonte plays as Thaddeus Thomas, the owner of the factory. One day, Louis is asked to deliver a package to Thaddeus' house. However, he accidentally walks by the bedroom window where Thaddeus' wife is undressing. Thaddeus sees him, and reports him to Louis' supervisor, who fires him the next day. Shortly afterwards, Louis is beaten by cops on the way home, evicted from his house, and lands in a sore spot with his family. Unable to find a stable job, Louis kidnaps Thaddeus in order to gain money for his family. A series of events follow that change both of their lives forever.

Not to be confused with the trope with the same name, which does not play a major role in the film.