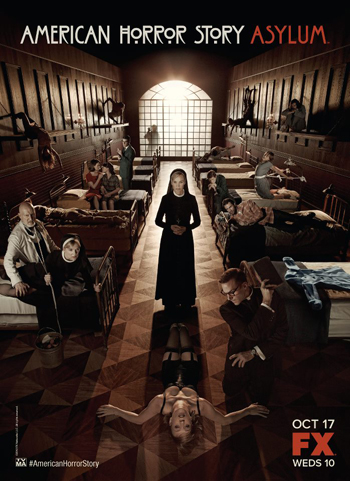 Taking Only Sane Man to terrifyingly literal levels.note Left column, from front to back: Dr. Arden, Sister Mary Eunice, Lana and Wendy, Dr. Thredson, Bloody Face (behind the window). Middle column: Sister Jude, Shelley, Monsignor Howard. Right column from front to back: Leo, Kit, and Grace.
"If you look in the face of evil, evil's gonna look right back at you."

Season two of American Horror Story, titled Asylum is set in the Briarcliff Institution in 1964, and deals with the administration of the asylum, led by Sister Jude, and its two newest inmates, Lana Winters and Kit Walker. Kit has been accused of being the Serial Killer Bloody Face after his wife's disappearance, but Kit claims that he was abducted by aliens. Lana was going to write an expose on Briarcliff, but Sister Jude got her institutionalized on the grounds that Lana is gay. Meanwhile in the present, the ruins of Briarcliff are still being stalked by Bloody Face.