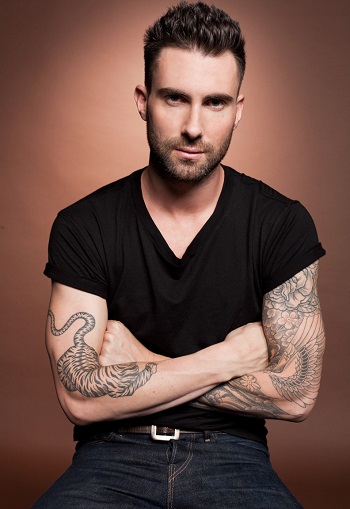 He's following the map that leads to you.
Advertisement:

Adam Noah Levine (born March 18, 1979 in Los Angeles, California) is an American singer, songwriter, television personality, clothing designer, and actor. He is best known for being the lead singer and rhythm/lead guitarist of pop-rock group Maroon 5, of which he was also a founding member in its original form as the band Kara's Flowers.

Levine is also known for his time as a coach on the American version of The Voice. He emerged the winning coach of the show's first, fifth and ninth seasonsnote with Javier Colon, Tessanne Chin and Jordan Smith respectively, and ended up having the second-longest run of any coach on the show at 16 seasons, beat out only by Blake Shelton, who has been a coach in every season and formed a famous "frenemy/bromance" dynamic with Levine during his time on the show.

In 2012, he made his acting debut in American Horror Story: Asylum.

Not to be confused with solo artist Avril Lavigne, or comedian Adam Devine.

Adam is a featured vocalist on: